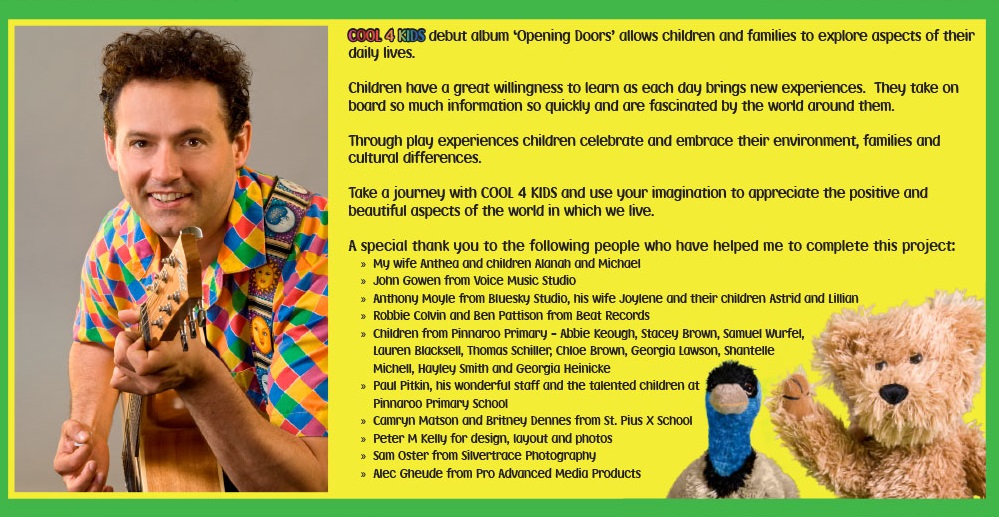 Cool 4 Kids Music for children is really for everyone. Children, parents, teachers and grandparents!

There are now forty-seven songs in total. All songs are written by Tony Genovese B Ed Music. Tony wrote the lyrics and all of the music parts. The first CD was made in Pinnaroo. Anthony Moyle was the engineer. Children from Pinnaroo Primary School sang backing vocals.

The CD was called ‘Opening Doors’. It was written and recorded in 2008.  In 2007 Tony took long service leave from teaching. Due to this he stayed at home while his wife Anthea returned to work in child care. Tony cared for his two year old son Michael. Michael would attend local child care one day a week. On the other days Tony looked after the family home and Michael. There were lots of playground visits and fun outings.

Michael loved music and dance. Hence his dad played guitar and sang to him every day. While this happened he wrote some of his own songs. Cool 4 Kids music for children is all about simple every day things. All of a sudden, word got around fast! As a result, Tony began to perform at other preschool centres and birthday parties. 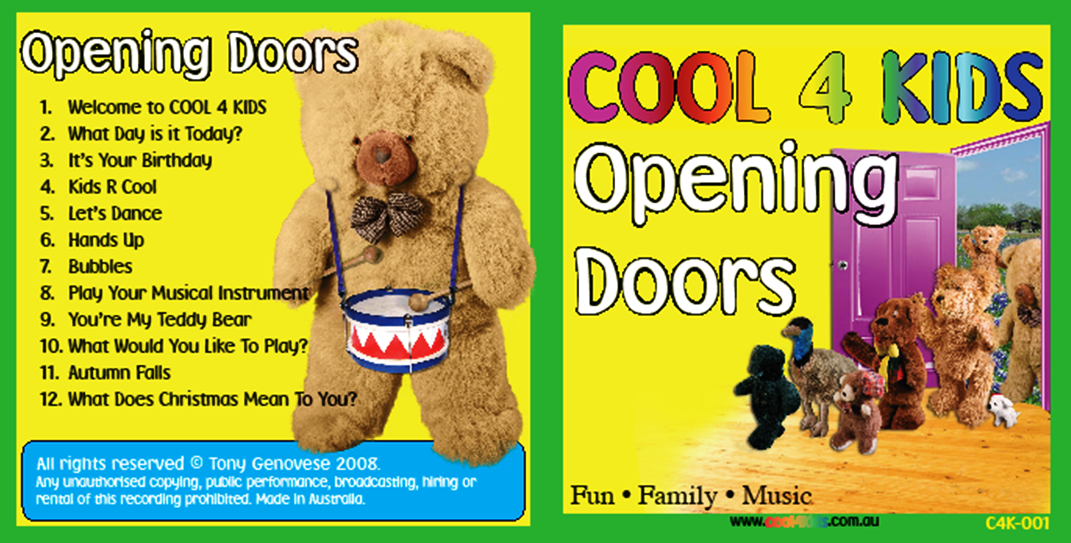 In August 2007 Cool 4 Kids was born. Tony was unable to return to part time teaching in 2018. Therefore he focused on song writing. Also demand for Tony’s work snowballed. At the same time he met Ann Venning. She was organiser of the Pinnaroo Spudefest.

Ann booked Tony’s band Pulse to entertain at the festival. Furthermore she won a grant from Country Arts SA. As a result, Tony worked as an artist in residence at the local school. At first they wrote a song called ‘Welcome to Pinnaroo’. Then the children made home made instruments.

Tony found instruments hiding in the school’s cupboards. Firstly he found a big marching bass drum! Next lots of chime bars. As a result he wrote music parts for the children to play. Consequently the song was performed live at the Spudfest event. It was a huge success!

About the Author: Tony Genovese