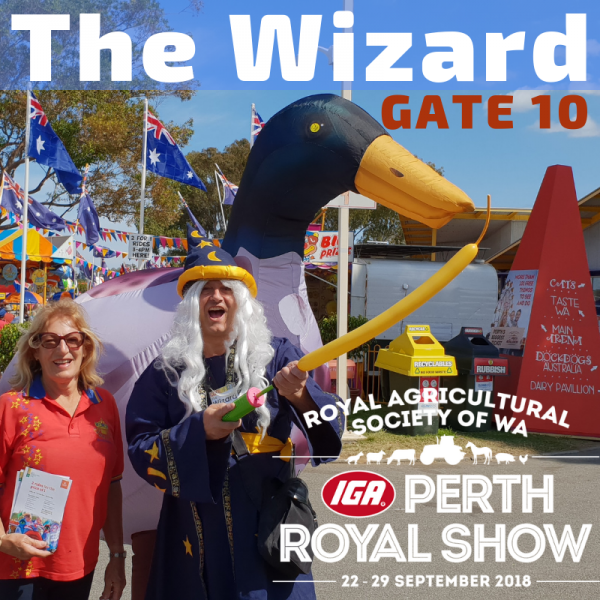 Kids music shows are so much fun! Tony Genovese from Cool 4 Kids performed at the 2018 IGA Perth Royal Show. The Gate 10 are was action packed and full of fun. To begin with I roved around as a children’s entertainer. Then I twisted and gave away thousands of balloon shapes. In addition The Wizard spread his magic.

Together with Percy Parrot and Pirate Pal, the roving was complete. With guitar in hand songs were sung for all. Firstly ‘The Wheels on the Bus’. Secondly ‘Baby Shark‘. Thirdly songs like ‘Sweet Caroline’ and ‘I’m A Believer’.

Not to mention the giant blow up characters! There was the duck, rooster, cow and bull. In summary Kiddie Land was filled with many happy faces. In the first place there were loads of fun rides and games for the kids. Plus the Dairy Shed had many tasty samples. In any event I ate quite a few cheese toasties!

Hot chocolate and gelato was popular. I even sang some songs in Italian like ‘That’s Amore’. I bumped in to Vince Garreffa from Mondo Meats – what a bonus. His products are the best! The Karvan Coffee stand was busy.

Not only could you watch live cow milking shows but you could have a go at the milking stations. The cows nearby sat very calmly all day long. Of course there were so many areas to sit and rest your weary legs. As well as the lovely grassed areas, plenty of tables and chairs could be found. In the cafe area people enjoyed the tasty pizza and hot chips.

Uniquely a family stopped me and called out my name. They had seen me perform at the Dianella Library back in 2010. Also they had bought two of my original cds. Not to mention they play my children’s songs all the time! Equally important they knew all of the lyrics off by heart. We sang ‘Get Moving’ together. In conclusion, that was a very special WOW moment!

In summary, there was so much laughter, smiles and gasps of amazement every single day!

About the Author: Tony Genovese